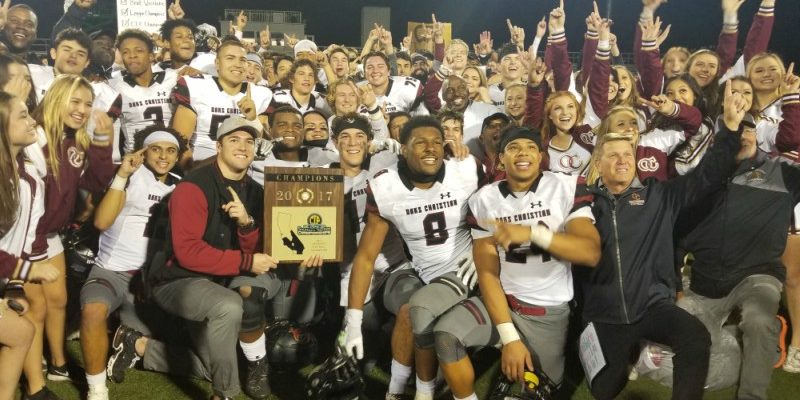 I turned in my homework a day late, but don’t worry, i’ll be honest.

Yes, some of these games were already played, but I already had predictions. I did already go 2-0 for my Thursday games. Hopefully I can go 18-0 on Friday.

QB Jayden Daniels is back for the Cowboys after leading them to the CIF State Finals. They face another CIF State Finalists. Helix lost a good portion of top players like Isaac Taylor-Stuart, Rashad Scott and Carson Baker, but they return Elelyon Noa and the o-line. LB Jonathan Perkins should lead the Cajon defense to a big win to start 2018.

La Habra opens their brand new stadium and what an upgrade! They face a tough Upland team for the second straight season in a row. The Highlanders are led by WR Taj Davis and RB Tyevin Ford. Davis will probably have to face DB star Clark Phillips, but as the line goes “There can be only one!” In a battle of the Highlanders, i’m going with Upland in this one.

No. 18 Murrieta Valley at Santiago of Corona, Friday, 7:00pm

QB Hank Bachmeier is back for the Nighthawks, but he’ll have to find a new go-to weapon with WR Marquis Spiker at Washington now. TE Jack Yary might take advantage of having one of the best QBs in the country. QB Nat Castillo is another big QB and with a good o-line back to protect him, they could potentially pull off an upset. I saw Murrieta Valley in a close one, but I may regret my decision.

Both teams lost some big names, but Rancho Cucamonga lost some of their guys to other schools. The Mustangs return a good portion of starters despite losing players like LB Andy Koch and DB Chase Williams. They do return Jalen Johnson at wideout and their new QB Kenzel Lawler should pick up where Jeremy Moussa left off. A potentially powerful offense might be too much for DB Mark Perry and the Cougars. Roosevelt wins.

These are two teams that fell a game short of the CIF Finals last season. Apple Valley returns some offense this season like QB Jeff Widener and RB Donovan Ferguson. Silverado lost a lot of starters and it should take time for RB Nick Reed-Casey and the six returning starters to get back where they left off last season.

No. 11 Chaminade of West Hills at No. 6 Oaks Christian of Westlake Village, Thursday, 7:30pm

Two years ago it was Oaks Christian with a 65-55 victory. Last year it was Chaminade with a one sided win. I guess it’s Oaks Christian turn. Lions DB Kayvon Thibodeaux and LB Josh Calvert will be tough to avoid for QB Ryan Stevens and the Chaminade offense. Oaks Christian wins. Maybe the Eagles win next year’s matchup.

It took a few minutes to pick a winner here. Both teams are pretty even. RB Jermaine Mitchell and WR Jamaal Bell should get the win for the Antelopes, but LB Stanley Taufoou and the Grace Brethren defense could prove me wrong. This could be a pick I may regret later. So even.

The Warriors bring in some new names mainly LB De’Gabriel Floyd. TE Seth Figgins will provide a lot of offense. The same can be said for WR Corey Jones. Westlake for the win.

Coach Casey Clausen has left Calabasas to take over at Alemany. The Warriors should improve under Clausen and if RB Omari Gray follows OT Dohnovan West, they should get the win. San Fernando took the CIF-Los Angeles City Section title and somehow didn’t get invited to the CIF State Regionals. They return a lot of starters, including RB Kyle Bryant and should return to the CIF-LACS Finals and hopefully get to the State Regionals. Facing a revamped Alemany team should help them.

Cathedral of Los Angeles at Banning of Wilmington, Friday, 7:00pm

The Phantoms lost a lot of starters to college, but the biggest blow was losing QB Bryce Young, who transferred to defending National Champion Mater Dei of Santa Ana. DE Stephon Wright should get a win for Cathedral over Banning and hopefully they can stay the course.

This might be the best Lions team ever, but they also face one of the better CdM teams. The Sea Kings have controlled the Pacific Coast League, but now they move to a much stronger Sunset League. Nothing will be different for CdM as they should be the favorites in the league after a good summer showing from WR John Humphreys. JSerra has a wideout of their own in Munir McClain, who will get the ball from Servite QB transfer Caden Bell. JSerra win this one.

The Troy Thomas 2.0 era has begun. This should be a little more difficult for Thomas as the Trinity League is brutal, much more brutal than the 2005 Serra League they were in. They will face FS/QB Cameron Williams, but Serra transfer QB Blaze McKibbin should have time to find his targets with lineman Richard Krebs protecting him. Credo wins.

I guess I could consider this an upset, but the Chargers lost a lot of starters. QB Patrick Angelovic will continue the family tradition at Edison, but it will be tough with DB Parker Marshall and the Tesoro defense should get the win.

I was expecting Capo Valley passing game against Tustin running game, but longtime Tustin coach Myron Miller is going to the air. I guess it’s good news for WR Jerome Childs, but I wonder how long this will last for the Tillers. The Cougars have QB Nick Manning and you can expect him to show Tustin how to go to the air. Capo Valley takes the opener.

Cypress vs. Woodbridge of Irvine at University of Irvine, Friday, 7:00pm

Cypress lost DB Elias Rios to baseball, but they do have RB/LB Isaac Hurtado and DE Miles Mendez. The Centurions win, but Woodbridge will improve with a new Nash taking over the team. WR Jacob Nash will make sure Woodbridge controls the Pacific Coast League.

A few people like myself picked Madison Helix as the top dawg in San Diego and a few others disagree. The Warhawks will have to prove that with RB Kenan Christon and QB Brock White, a transfer from Rancho Verde of Moreno Valley, leading the offense. WR Johnny Tanner will look to lead a much improved Rancho Bernardo team this season which returns all, but one starter this season on offense. The Broncos will get better, but Madison takes this.

No. 19 Cathedral of San Diego at La Costa Canyon of Carlsbad, Friday, 7:00pm

The Dons took the CIF State title in 2016, but had a tough going last season. They return nine offensive starters and seven starters on defense. RB Shawn Poma will lead the way on offense and LB Jordan Allen will lead the defense. Allen will have the tough task of stopping Mavericks RB Karson Lippert, who is a bulldozer. He’s a tough guy to stop, but Cathedral Catholic will win this one.

The Falcons will be going to their big boys this season. A tough offensive and defensive line this season led by Brian Driscoll and Payson Campisano. Torrey Pines will run into LB Josh McCurty and the Titans defense. I’m going with the Falcons in this one.

This game is at Carlsbad, which means the Loud Crowd will be roaring tonight. WR/DB Asa Turner should get a boost from the crowd, but they face the defending CIF State Champs. WR Valon Martinez, RB Wes Neely and the Cougar offense should prevail in on a loud Friday night.

Grossmont will go to QB Jaime Odom and his WR duo in Desmond Carter and Thomas Mangum. That should do the trick against the Knights.