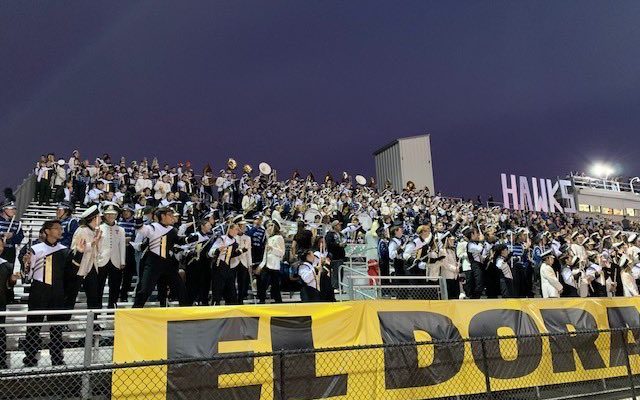 With all the talk about student sections, the attention tends to drift away from the marching bands.

The bands prepare and make sure the momentum is at a positive and at a high during the game as an attentive rowdy group of fans can help a football team win. With a student section as rowdy and crazy as the El Dorado Hawks Nest of Placentia, you can possibly miss the talents in the band.

You can hear them and when the student section can’t get the fans or the team spirits up, the band can and the El Dorado Golden Hawks Marching Band can do that and do it just as well as the Hawks Nest.

Do you perform at other El Dorado sports functions like basketball and how has the reception been?

At the moment, no. We do not perform at other sports functions. The football season ties into our Marching Band season so scheduling-wise it works out for us. It also gives us the opportunity to get a “dress rehearsal” of our competitive field show before we compete at a Field Tournament. After the Marching Band and Football season is over, we focus on other areas of our program such as Jazz Band, Concert Band, Winter Percussion Ensemble, and Winter Guard so our program does not have time to perform at other functions.

I enjoy the game and follow throughout the game. Partially to enjoy the competitive aspect, but also to be sure that we are playing at the appropriate times.

We have a book of pep tunes from year to year that the band has traditionally played at football games. One of our favorites is Beyonce’s “Crazy in Love”. It always seems to get the crowd going. After every kickoff, we play a drum line chant called “Rain Dance”. I wrote it for the drum line in 2007 and it has stuck ever since. Most students at El Dorado know the groove and joins in with the band for the vocal part. The band goes crazy when the drum line plays it.

The crowd is very receptive to the band when we are in the stands. They cheer along with us and sing to songs that we play. More importantly, when the Marching Band takes the field for half-time, the crowd typically stays in their seats to watch our show. Over the past few years, the football crowds has been quiet and respectful of the student performers which gives us a great environment for our performance. And to top it all off, the student section, football players, and cheerleaders come over to the band in the stands to sing the school’s Alma Mater as the Band plays it. This is always the highlight of the game for me whether we win or lose.

We will often have chants go back and forth with our student section aka “The Hawk’s Nest”. They also do a great job of singing along or chanting with the pep band.

Of all of the aways bands that we have heard, we always enjoy listening to Villa Park HS. Their band director, Chuck Jay, is an old friend of mine. They are a smaller band but they pack a mean punch with their sound. Furthermore, they also stand and listen respectfully during our half-time performance then send their student leaders over to visit with us. It is always a great visit for our students.