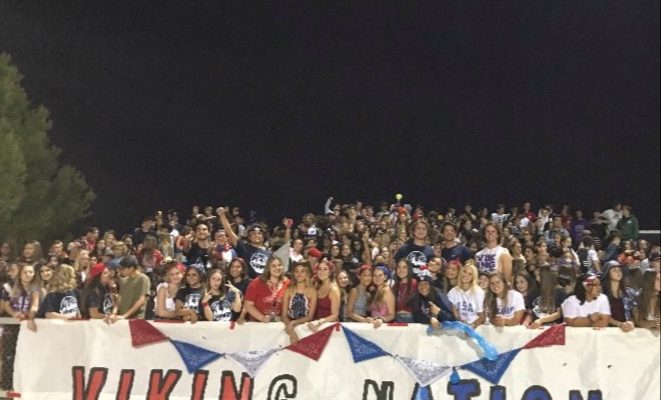 The Valencia Viking Nation had made several appearances as a SoCal Student Section of the Week nominee, but fell short every time.

Viking Nation stepped it up with their Vikings hosting the first round of the CIF-SS Division II playoffs against San Clemente.

Viking Nation went with a “White Out” and did what has been working all season and that is go wild for their football squad. Viking Nation showed off the craziness in the stands and almost rattled San Clemente.

While Valencia season came to an end with a 17-7 loss to the Tritons, it was a great way for the Viking Nation Football Student Section to end.

Hopefully, this can carry over to Basketball season. Once again, Viking Nation representative Los Angeles, but this time there was a different outcome as the Valencia Viking Nation take the SoCal Student Section Title.

The Los Angeles and Southern California Football Student Sections come out in three weeks, so we will see if they’re the best student section in the Valley, but I’d probably aim higher VNAT!

For now, enjoy this Weekly Award!

We spoke with Viking Nation on what it took to take the title this week. You guys are the So Cal Student Section of the Week,  beating out the Ramona Rowdy Rams, Trabuco Hills Stampede and the San Marcos Blue Crew. What did it take to stand out as one of the best in Southern California?

Viking Nation: Our most memorable game this season was our Purple Out game vs our hometown rivals Hart. It was an away game, however it was filled to max capacity with every student showing up. It was just a “sea” of purple, and the most spirited Viking Nation has ever been, cheering on our team with a game winning field goal. Viking Nation stormed the field after the game and waved the other team goodbye.

Viking Nation: The best theme we had this year was our Orange Out game. This theme was implemented to honor one of our students Pedro Roman, who had been diagnosed with Leukemia. It was great to see every student send him positivity and strength through wearing orange and cheering on our team. We had orange powder to throw, a giant orange Nemo mascot being thrown around, and oh yeah Jeff Bezos and Tony Gonzales were at our game. Viking Nation: The best chant is probably “I believe…” It’s the best because we do it during the game in the stands right before we throw our powder every game. It’s also chanted at the end of the game on the field with everyone in a big mosh pit when we win.

Viking Nation: Our least favorite chant is when other schools chant “Scoreboard” when they are winning. But they don’t realize it’s going to bite them back, because we end up outscoring them eventually and winning the game anyway. Viking Nation: We don’t pay too much attention to other schools student sections because we have to focus on being the best! Usually the schools we play end up coming into our student section anyway. However, we do have to give our respects to Ramona Rams of Riverside. We beat this student section for best in SoCal, but they look like they are having a fun time!