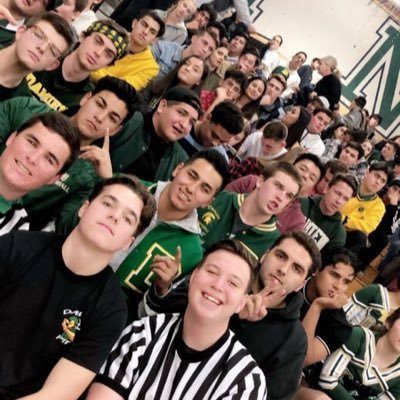 The Pit is enjoyed fantastic basketball from the Spartans for years now and this season was no different. The Pit shows up and go wild as not only does Damien have to battle in a loaded Baseline League, but this league is also loaded when it comes to student sections and The Pit stood on top of the rest.

“We’d first like to thank our teachers and administration for always having our back through thick and thin,” Pit Leaders Tyler Pugmire and Colin Senise said. “On top of that, there’s no way any of this is possible without our incredible students in the Tri-school community. We also send much appreciation to Coach Mike LeDuc for allowing us the opportunity to cheer on such a successful team. None of this would have been possible without Coach and the rest of the guys. Special thanks to Mrs. and Ms. Amrhein, Mrs. Pasillas, and Mr. Staples; you guys always had our backs, and we cannot thank you enough. Lastly, to our fellow Pit leaders, thank you for helping us on our journey, you guys are the reason we showed up to all these games — always a family.” The Pit battled with their student section league opponents and now they are on top as the 2019 Inland Empire Basketball Student Section of the year! Shout out to our students, parents, & families for joins us this evening! pic.twitter.com/X4ysfc9rFR

The Titans battled in a league is not only a solid basketball league, but apparently a solid student section league as well! The Titan Army brought their A game this season.

The Gold Zone has enjoyed fantastic basketball for years from their Golden Bears. It is no wonder that this student section brings the noise and/or the funk every year.

The Wolfpack battled in a tough Southwestern League and the Red Wave stayed the course with another big year in the stands for the Red Wave. Year in and year out, the Red Wave delivers as one of the best in the IE.

Rancho Verde just finished a fantastic season and the Red Zone was their to witness it. The Mustangs went to the CIF-SS Open Division playoffs and went to CIF SoCal Regionals. The Red Zone has enjoyed the ride this year.

Colony is always on top of their league, no matter what league they move to. Their student section shows up for them no matter what.

This is the best league when it comes to student section in Riverside and perhaps the state. The Red Zone leads the way the entire year and with a playoff battle during league play for the Nighthawks, the Red Zone didn’t disappoint with their tremendous support.

When you have Lamont Butler on your team, you not only just show up for the games, you go wild! The Bears student section their moneyworth this season.

The Redhawks are always on top of the Citrus Belt during basketball season and their student section is no different. Winning team, winning student section.

The Red Zone is one spoiled student section. They get to cheer on one of the best basketball programs in the state year in and year out! The Red Zone does their best to match that type of talent on the court.

The Lions Den used to be a monster back then. Very savaged type of student section. The Lions made the postseason and i’m sure they got a bit of a boost from the Lions Den.

The Desert Empire League produced a CIF Finalist and has another powerhouse program in it, so the Dungeon was needed and they delivered with school spirit as the Knights finished in second place.

The Wildcats moved into a much tougher league and Maroon Platoon stepped up. A solid finish in a league that consisted two teams that went to the CIF SoCal Regionals and a third team that is ranked in the state. The Maroon Platoon was ready to go for the best of the best to see their best.

The Blue Hole came to battle as their Titans had to do the same in a brutal Ivy League this season. Every game was a playoff and the Blue Hole was ready.

The Red Zone did their thing this season as it was needed for the Wolves in a tough Big VIII League. The fourth Red Zone in the top 20 and this Red Zone is no different than the other two.